"In the Eye of the Beholder" by Lena Mattsson. Moderna Museet Malmö 2014

”In the Eye of the Beholder” is a sculptural video triptych that examines the rock'n'roll myth.
All three video pieces are synchronized to a surreal rock'n'roll video triptych that envelops the viewer and both visualizes and illuminates the myth about the man and the human being Bo Cavefors; writer, director and last but not least legendary publisher of literary works by Ezra Pound, William S Burroughs, Friedrich Nietzsche, Salvador Dalí and many others. One politically controversial example is the publishing of texts written by the Red Army Faction (RAF), which resulted in litigations and much dislike. The publishing house filed for bankruptcy in 1982. Bo Cavefors tells us personally, in this piece, about his life and way of living.
In one of the films the role of the beholder is played by Ola Åstrand. Ola, the curator of the exhibition I Want to Hold Your Hand, is an interesting and diverse artist, curator and musician.
The third party who contributes with newly composed music is Conny C-A Malmqvist, musician, philosopher and art critic.
Right now you are probably thinking "What has Cavefors got to do with the world of rock'n'roll?”
Many people near and dear to me has been involved in both the rock'n'roll scene and the literary scene, and to me these both worlds are strongly connected. When I got invited to I Want To Hold Your Hand, at the Borås Museum of Arts, the first person that came to mind and that I could not get out of my head was Bo Cavefors!
Bo Cavefors is to me, in spite of his claim of being totally unmusical and belonging to another cultural field, a person who, as we say in Skåne, rockar fett (totally rocks). What is rock'n'roll really, who can be rock'n'roll, and how can the expression be different from the commonly conveyed?
Welcome to a video installation about the man, the myth and the human being Bo Cavefors. 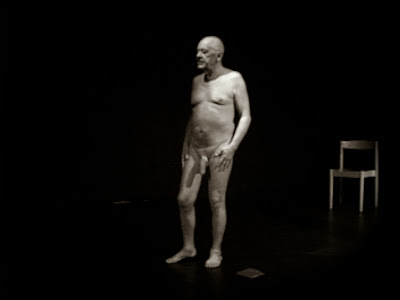