THE WOMAN IN THE STONE 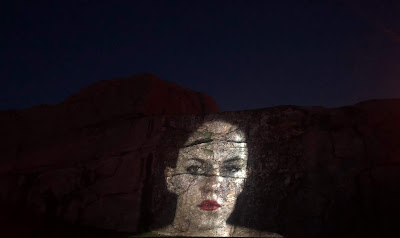 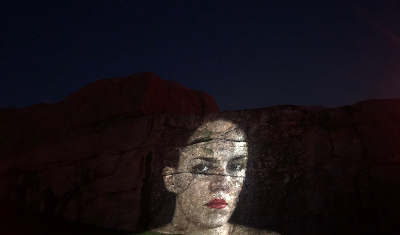 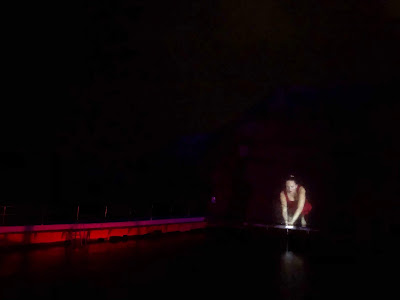 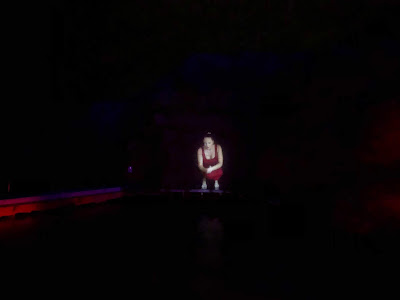 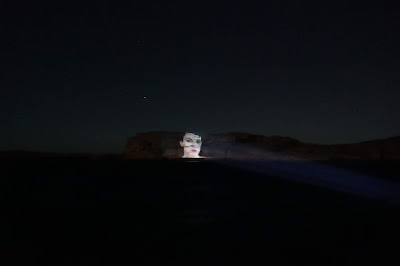 THE WOMAN IN THE STONE
“Perception of time and space”. This is the title of Lena Mattsson’s three moving image projections which were exhibited during the Light Art Festival on the Island of Light, Smögen, in September 2019. All represented one and the same woman (Amanda Cataldi), in two cases her face only, but in one case a complete figure, dressed in a bright red dress toning in with the pale red stone of the cliff walls onto which the image was projected. She looks at us, the spectators. She moves slowly in a wavelike motion down to the water, appears to pick something up then seems to drop it back into the water. In typical Mattsson style there is a concrete background to the movement, at the same time as it is abstracted so the spectator is not bound to a single interpretation. The place where the woman appears to be standing is a place where the locals fish for crabs: they fish for them and then release them into the water again.
Perhaps Mattsson, who grew up in the neighbourhood, has childhood memories of crab fishing in this location. That there is a personal connection to the place is even clearer in the first of the three female forms, where she appears only as a face – a face that looks wide-eyed back at the spectators, with cracks crisscrossing, which derive from both the concrete cliff face and the projected film images. The work is accompanied by a dreamy musical strain by the composer Conny C-A Malmqvist; the sound of stone being cut occasionally breaks through, and in the image the shape of a man, a stone cutter, emerges. Most certainly there are stone cutters in the Mattsson family too – but it has also been long-established as primary employment in the area in general. Again there is a connection to the location itself as well as a personal one.
The illuminated woman’s face seems to emerge from the stone, to be it, but is something larger than the present and the recent history. The stone is millions of years old. The woman looks at us wondering, searching, at one point tears run down the cheeks and she wipes them away – or is it just the water we see dripping towards the lower part of the image? A crab appears from above moving diagonally over the face. The woman wears red lipstick, she is strikingly beautiful. In the complete figure with the red dress she is like life itself. She cups her hands in the water and appears to offer us something as she rises up. Standing she has a crack across her face. The cracks in her make her more fragile yet. Life is delicate. But it goes on. The woman’s challenging gaze makes us reflect upon our own life, a fart in the universe as they say, but we still have the ability to act, and break the stone.
We are at the mercy of the woman and her power. It was in a way very appropriate that it rained and stormed over Smögen during the festival. In the dark and with the winds it was almost dangerous to walk out onto the jetty to look at the third figure, once again an image of the woman’s face, projected on a rock out in the water – until the storm claimed the projector which disappeared into the waves. The strength in the face which glows white against the stone, and looks seriously at the visitors with the waves whipping around them, is not to be missed. One can compare it to a siren, a dangerous figure that lures seafarers often causing them to founder.
The fact that it is a woman that is chosen to model for the project, and who gives life to the stone at the same time as the stone gives life to her, can be understood on different levels, and of course is mainly based on Mattsson’s own gender. Her own past too is in the cliffs. But it is also inevitably a statement that it is the woman who symbolises nature and life. That nature is described as a woman – “mother earth” – who is exploited in a patriarchal society, is not unusual. But this woman stares back. “Who are you?” she seems to say. She offers resistance. So the meeting with her also becomes a meeting with myself. What am I doing with my life?
It should be said however that the meeting with Lena Mattsson’s three female figures is also an aesthetic experience in its own right. The enlarged face in the first setting shimmered with different facets of colour against the stone. As water is a recurring and bearing element in Lena Mattsson’s art, the rain during the exhibition in Smögen was most appropriate – the wet stone shimmering like silver. Naturally the figures can also be viewed without the rain and wind. But the conditions surrounding the display play a part in this location-specific work of art. Like a wave, it moves uninterrupted from here and now to a much larger space, and to a time that extends far beyond the beginning of our lives, and back again. You could perhaps call it “Larger than life”.


Lena Mattsson
Perception of time and space
Monumental audiovisual projection in 3 parts by Lena Mattsson
at Island of Light, Smögen 12-15 September 2019
Music: Conny C-A Malmqvist
Film documentation: Stella Jaskoviak Åstrand, Lena Mattsson
Still picture: Malin Nilsson
Editing and sound: Lena Mattsson
Music: Conny C-A Malmqvist
Copyright: Lena Mattsson 2019
Lena Mattsson's new films "Perception of time and space" are site-specific and edited to be projected on the islands of Hästen, Vallevik and Smögens cliffs to collaborate with the shape and historical context of the red Bohuslän granite cliffs. The films reveal the common identity that we share in the experience and memory of the landscapes we come from, which in this particular case is also her own origin.
While highlighting the natural and cultural landscape, and the importance of the environmental aspect for its survival, the films problematize a romantic nature experience through various distortions, interpretations and questioning of the original site. Instead, we are allowed to enter as visitors into a magical world, a place poetry that can only be understood in an interweaving of history and present where we acknowledge humility for nature and for each other.
Lena Mattsson is an artist, being born and having grown up in Kungsham, “Gravarne”, at Tången in Springet. She partially has her origin in the famous stone cutter family Lundgren, who has created many well-known stone sculptures for many established artists. Her grandfather Helge was one of the Lundgren siblings, who early on began cutting stone as to provide for the family. Helge, who was a stone cutter until his too early death, is part of one of the movies. Being a stone cutter was hard life, if one wants to know more about the Lundgren family one can read one of the books from the author Arne Lundgren, for example ”Sprickorna i fars händer”.
The music to ”Perception of time and space” by Lena Mattsson is composed by the musician Conny C-A Malmqvist.