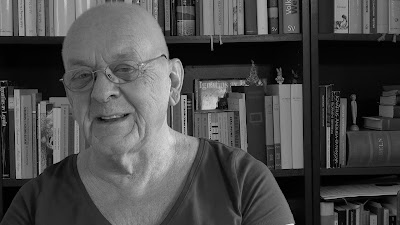 The artist Lena Mattsson has documented and filmed Bo Cavefors for many years.
Now will two film versions of these works be shown: I betraktarens öga
(In the Eye of the Beholder) from 2014 and Den kulturelle onanisten
(The Cultural Masturbator) from 2015.

Lena Mattsson’s synchronised video triptych I betraktarens öga was shown in 2014
at Moderna Museet Malmö. Both the video triptych and the documentary film shed
light on the life and times of the myth, man and human being Bo Cavefors. The film
has English subtitles and is 35:29 minutes long. The music was specially composed
by Conny C-A Malmqvist. C-salen.

In the film Den kulturelle onanisten (The Cultural Masturbator) Lena Mattsson focuses
the camera on questions about censorship; censorship is something both she and
Bo Cavefors have been exposed to. She illustrates in an artistic and poetic way,
the right to express oneself in words and images. The film is 34:20 minutes long.
Lena Mattsson gives a short introduction to the films. Don’t miss the exhibition
Bo Cavefors förlag – an unbounded story of culture in Mellanrummet, Malmö Konsthall.